How To Understand Painting

A lot of specialized books are written about how to understand painting. But if they teach how to read books in every school, not everyone can read the picture. To be able to read and explain a picture is a whole science that has been studied by art historians for many years. This is a special language with its own laws, grammar and syntax. This article is written to help ordinary people who did not study in academies and did not study art history, to investigate the world of painting.

So, let’s talk simply about the complicated, disassembling in detail a few masterpieces of world painting.

I would suggest that you go through the following stages in your imagination:

Stage 1. We study the motif of the picture

It is necessary to understand what prompted the writing of the work. It can be the Bible, historical or current events, nature, architecture, rituals, legends and myths, even dreams. Something in the surrounding world, very close to a person, gives them the opportunity to express themselves, to convey something important and profound through these images.

For example, the motive for the famous painting of Nicholas Ge “What is Truth?” Became the Gospel of John (“Jesus before Pilate”). The biblical storyline is chosen to convey the artist’s very significant and personal spiritual experiences. 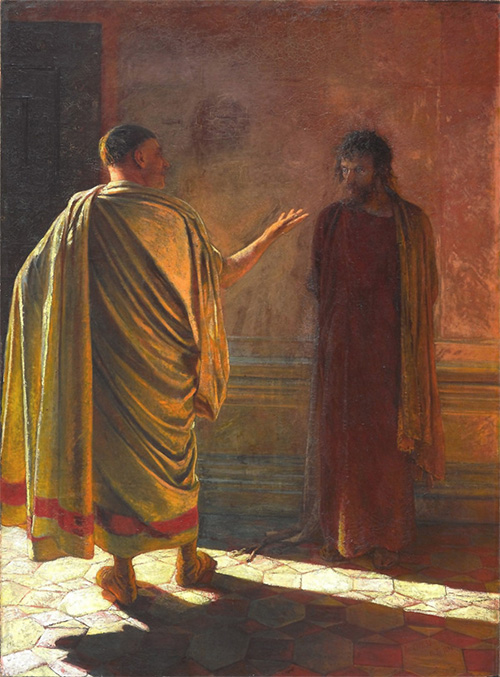 The motive for the canvas of Mikhail Vrubel “Lilac” became a blossoming bush of lilac. It embodies the characteristic image of symbolism – the image of spontaneous world, which lurks under the cover of twilight. The artist seems to display the spirits of nature, born in the ancient mythological consciousness. 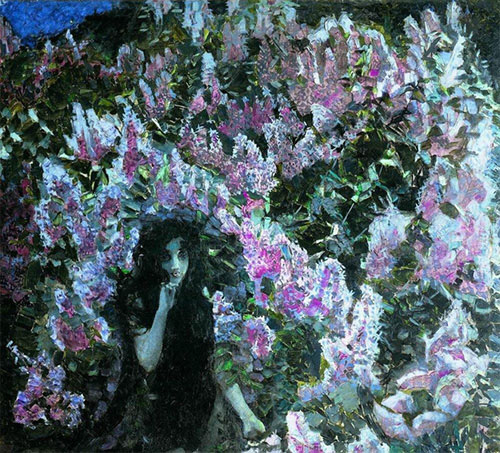 Motives for the paintings of Salvador Dali, as a rule, were dreams. In them, the artist found the most imaginative solutions for his works. In the book “Diary of a Genius”, Dali pointed out that surrealism is very strongly connected with the psychoanalysis of Sigmund Freud. In the following analysis, let us turn to the painting “The Face of War”. 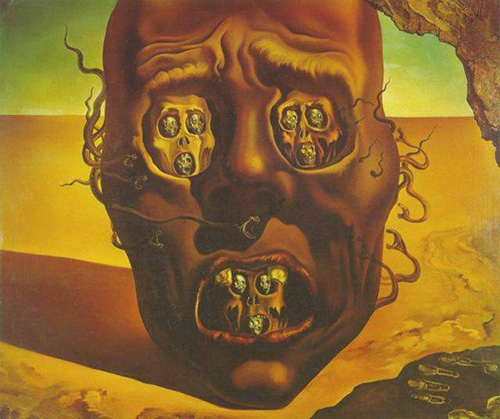 And Isaak Levitan, for example, was looking for motives for his paintings in nature.In other words, we can say that the motive is something in the surrounding world, which gives rise to a creative, picturesque solution of the work, its first, most understandable layer.

Stage 2. An imaginative solution, symbolism, artistic interpretation of the plot

Understanding the artistic interpretation of the plot appears in the study of the language of painting.

The artistic solution is inseparable from the plot or motive of the picture. These are parts of one system. This can only be expressed in words partly. Changing the color and compositional solution, we change the meaning. The motive itself has many options for interpretation. The nature of the impressionist Claude Monet and the nature of the realist Levitan are completely different images. The images of bathers in the paintings of Pierre-Auguste Renoir and Paul Cezanne bear a different semantic load.

If we want to understand the inner meanings of the picture, the story that the artist has invested in it, we need to know the language of painting.

Let’s consider the main components of this language:

One of the main compositional techniques is the separation of the main and secondary, as well as the connection of the elements of the picture through a simple geometric figure. The most common use is a classic composition triangle or a circle. There may also be a twisting or expanding spiral. An important value in the composition decision of a picture is the format: landscape (horizontal), portrait (vertical) or square.

For example, in the picture of Ge “What is Truth?” the composition is constructed through triangular forms. 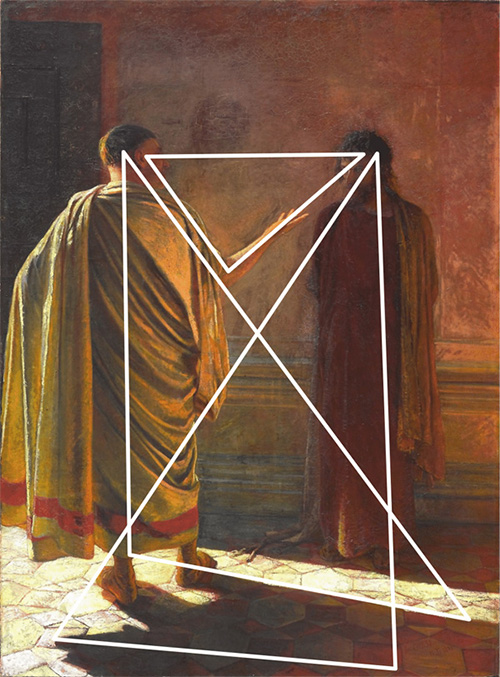 This creates a link between the protagonists of the picture, reinforcing the question of Pilate. In this case, the triangle of light formed by light on the floor and the figure of Pilate, and the dark triangle from the side of the figure of Christ, on the contrary, divide them. The vertical format attunes the picture, elevated view. This technique is often used in works on spiritual themes.

Similarly, we see the use of triangular forms in the picture of Vrubel, but here they give a slightly different meaning. 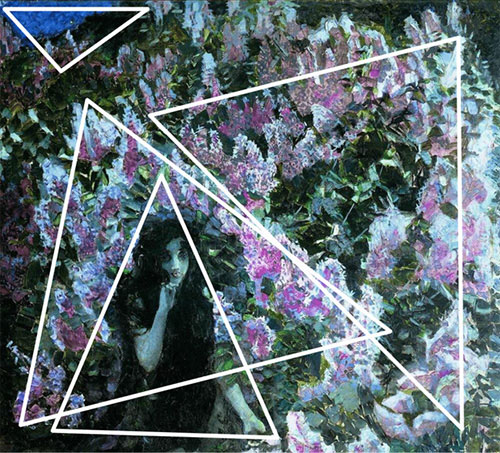 One triangle that forms the figure of the girl is part (soul) of the other triangle formed by the lilac bush. Thanks to this decision, we see the contours of one of the forces — the soul of the lilac bush, the dryads — appear in the moonlight. In this case, the complexity of the triangle pattern conveys the beauty of this soul. 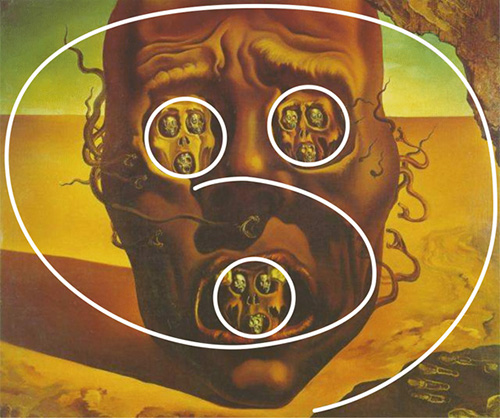 The plot of the picture spins into a spiral, directing the viewer’s view. A terrible sensation of a tightening funnel is created, which is amplified by the square format of the picture.

Almost all artists know about these means of pictorial language. They are looking for the right contrast: contrast shapes, color contrast, tonal contrast. All this attracts the attention of the viewer conveys various information.

In the picture of Ge, “What is truth?”, first attracts the contrast between the figures facing each other. The bright contrasting figure of Pilate, who asks the question, and the dark, hidden in the shadow, the figure of Christ. At once we read: the truth is not obvious, it is always hidden, it cannot be conveyed in words. Light and shadow share these figures. Pilate is far from the truth. He will not be able to understand it, even if Christ answers. It’s like the impossibility of conscious (day) mind to comprehend the inner (night) world of the subconscious. Another contrast is the contrast of the images of Pilate and Christ. Smiling, satisfied with the life face of Pilate and concentrated somewhere inside, the detached view of Christ further divides the human and spiritual worlds.

3. Language of images, symbols and signs

A sign and a symbol are conditional visual meaning of any concept, feeling or phenomenon. They are the main tools in working with images. It is something that appeals directly to the inner world of a human, to his archetypal images, bypassing all the constructions that the logical mind can build. It is necessary to distinguish signs and symbols. A sign has one common meaning, a symbol is a set, depending on the context in which it occurs. For example, a road sign has only one common interpretation, whereas a white color may be a symbol of purity and a symbol of death.In the picture of Ge “What is truth?” the sign is the question gesture of Pilate.Vrubel on his canvas wrote lilacs as a symbol of Spring, beauty, love, the first excitement of love. Night is a symbol of secrecy. There are many meanings here. For example, the night poetry of Spring is always mysterious, like love. And love is as much a mystery as night, because it is an invisible state.The symbolism of Dali’s painting The Face of War is fear. Everything in this picture conveys the image of fear. Pay attention to the details (skulls, snakes). The more skulls and snakes, the more fears. Desert in the background is a symbol of infertility, devastation, death. Why desert? Perhaps because every person should feel the terrible death. After all, war and death are closely related.There are many literary sources devoted to the study of images and symbols. The book by Joseph Campbell “Hero with a Thousand Faces” helps to study the general meaning of mythological and fairy tale subjects.

In painting, as in music, a powerful expressive means is the rhythm. Examples of rhythms are the endless question (interrogative gesture) repeated by the rhythm of the folds on the mantle of Pontius Pilate. In the picture of Dali, it is death and fear in every piece of the picture, in everything that we see, hear and say (infinitely repeating skulls and snakes in the eyes, ears and in the mouth and in the small skull). 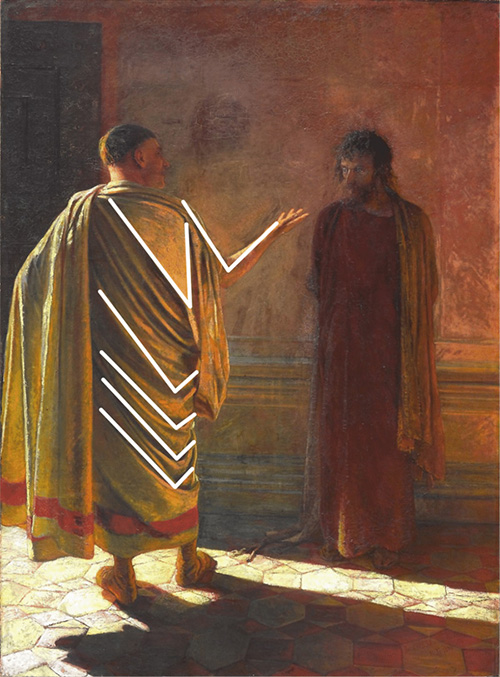 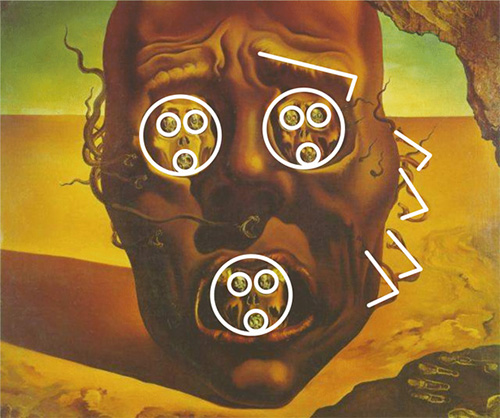 Unfortunately, the format of the article does not allow us to cover this topic in more detail and fully. For example, the study of the color of the picture, style and manner of the artist deserves a separate description. Therefore, for the curious ones, we recommend that you read books by Nikolai Volkov “Composition in Painting” and Vasily Kandinsky “Point and Line on the Plane”, “About the Spiritual in Art”.

We will be glad if the information in the article inspires you to further study this field, and if you visit the art museum, exhibition or our virtual gallery, you will see something new for yourself. After all, the world of paintings is a very interesting world. This is another way of conveying information (not in words, but in images), which will broaden your perception of the surrounding reality and give you some insight and discoveries.

Thank you! Your submission has been received!
Oops! Something went wrong while submitting the form.

We Are In Social Media

Thank you! Your submission has been received!
Oops! Something went wrong while submitting the form.
×